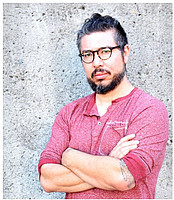 J. Michael Martinez received the Walt Whitman Award from the Academy of American Poets for his first book,  Heredities. His latest book,  Museum of the Americas, was longlisted for the 2018 National Book Award in Poetry and Winner of the 2017 National Poetry Series Competition. The book is an exploration in verse of imperial appropriation and Mexican American cultural identity.  Martinez is the editor of Noemi Press and currently teaches poetry at St. Lawrence University in New York. Website

David Savran is a specialist in twentieth and twenty-first century U.S. theatre, transnational music theatre, performance theory, and social theory. He is the author of eight books, whose wideranging subjects include the Wooster Group, Tennessee Williams, George Gershwin, white masculinity, musical theatre, and middlebrow cultural production. His most recent book is Highbrow/Lowdown: Theater, Jazz, and the Making of the New Middle Class, winner of the Joe A. Callaway Prize and the Kurt Weill Award. He has served as a judge for the Obie Awards and the Lucille Lortel Awards and twice was a juror for the Pulitzer Prize in Drama. He is the former editor of the Journal of American Drama and Theatre and is the Vera Mowry Roberts Distinguished Professor of Theatre and Performance at the Graduate Center of the City University of New York. Website

Karen Tei Yamashita is the author of Through the Arc of the Rain Forest, Brazil-Maru, Tropic of Orange, Circle K Cycles, I Hotel, Anime Wong:  Fictions of Performance, and Letters to Memory.  I Hotel was selected as a finalist for the National Book Award and awarded the California Book Award, the American Book Award, the Asian/Pacific American Librarians Association Award, and the Association for Asian American Studies Book Award.  She received a US Artists Ford Foundation Fellowship and is Professor of Literature and Creative Writing at the University of California, Santa Cruz. Website